I’ve not written in the last couple of days because there really hasn’t been any significant change to talk about.  Subtle shifts, yes, but it’s taken a couple of days to establish whether these are real or just my imagination.

Maybe first and foremost has been a gradually rise in mental energy – as opposed to physical energy which, although slightly stronger, still falls into the “hitting the wall” category of debilitating weakness…  Over the last few days I’ve had to take care of some work on the computer.  My concentration and focus has been totally 100%, and in terms of stamina has been well above my everyday standard.  I put in a couple of eight-hour days without any breaks and without any fatigue.  The funny thing is that I’ve managed this on increasingly less and less sleep.  I just don’t get tired.  I’ve been averaging between three and five hours sleep per night, and it’s had no effect whatsoever on my performance.  And then there are the evenings.  I’m just not sleepy.  No yawning.  No heavy head.  I lie down and I just lie… I’m happy to rest my body, but sleep doesn’t come quickly.

Also, the trend I had mentioned a few days ago about waking up refreshed, a few hours after going to bed, has distilled into a mere two or three hours of sleep.  So the last few days I’ve been waking up at around 1-2am, after which I get up to meditate for an hour or two.  Afterwards, I go back to bed – which is entirely different from going ‘back to sleep’, because at this point I usually lie for several hours tossing and turning.  Finally, in the early morning hours after it’s beginning to get light, I drift back into a heavy oblivion for another couple of hours.  Interestingly, I do sleep much more heavily than usual.  Perhaps, as a result, I’m getting enough deep sleep more efficiently and on fewer hours.  Or perhaps I need less deep sleep overall, because the fast is already providing me with the healing energy I need throughout the day.  On the other hand, they do say that you need to be in delta brain waves in order for this to occur, and since I’m awake through the day, this obviously isn’t happening… Just one other point regarding sleep.  I find myself lying down in the sun and dozing off for just a few minutes, usually just once in the afternoon.  Again, it’s a heavy sleep which completely refreshes me.

I wonder whether the emerging pattern is an evolution of my everyday sleeping pattern, which has, for years, involved sleeping through the first four or five hours, waking up to meditate, and then going back to sleep for another couple of hours.  Now, since my sleep requirements have lessened, it seems that the period when I’m up in the night has simply stretched in both directions, extending earlier and later. 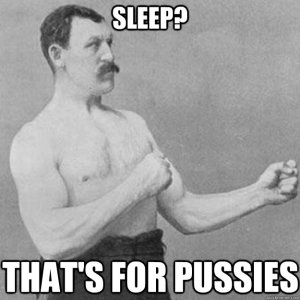 So tonight as I write this (going into Day 14), it’s half past two in the morning, having had my allotted two-and-a-half hours of sleep.  This time, rather than simply lie in bed tossing and turning, I decided to follow my body this time and get up.  Lying in bed was simply a habit, and was perhaps also driven by the ‘fear’ that I won’t be able to make it through the day if I’m up and about in the middle of the night as well.  So far so good, though.  My fingers are racing over the computer keypad with no problem!

A couple of days ago, it occurred to me that one of the primary functions of sleep is to take a break from ourselves – in other words to take a break from constantly having to spend time with our ego!  Yes, maybe we do need to be in delta waves in order to fully regenerate and heal, but I think there’s something else going on.  On a fast like this, I’ve been spending an awful lot of time with myself, especially given that I’m not cutting up the day with mealtimes and a work schedule.  The day stretches ahead in one long, slow, continuous arc.  Now, with significantly lower sleep requirements, I’m spending even more time with myself.  Well, a couple of evenings ago, before going to bed, a subtle, half-formed thought wafted across my consciousness: what a relief it is to be going to bed.  At which point my analytical mind started racing!  Why should it be a relief?  Let’s face it, spending time with your ego is unbearable.  In its pain and separation from deeper self, if you identify strongly with the ego, life is hell.  Sleep is a reprieve from this hell, if only temporarily.  I don’t feel my ego has too much grip on me anymore – and especially so now, as increasingly I’ve surrendered to this fast – but nevertheless it’s always there, as an inevitable part of consciousness linked to a human body.  Maybe this is why, during our ‘break from ourselves’, we can regenerate in delta sleep: because only here, in delta brainwaves, is the ego fully absent.  Even in the subconscious theta waves of dreaming, the ego is still there, if manifesting itself in a less overt form.

So here we are going into Day 14.  Exactly two weeks down, one to go.  To be honest, I don’t feel anything special.  It’s just a number to me.  All numbers have started to become pretty meaningless over the last few days, including the detailed record I’ve been keeping of daily weight, blood pressure, and water drunk.  Whereas in the past I looked at how much weight I was losing and thought: ‘how on earth am I going to survive this if my projected end-weight is only just over 50kg!’, now it’s just an arbitrary shape of writing on the paper, as I slowly fade away!  Likewise, at the beginning of the fast, numbers provided a tool to contrive meaning by cutting up and conceptualising time.  Now time just does its own thing, and I follow what the day has to offer.

Physically, my blood pressure has very slightly gone up, which has slightly reduced the danger of blacking out upon standing up.  Perhaps as a result too, I feel slightly stronger.  Nevertheless, yesterday’s digging to build the border of a new herb garden did take it out of me, and for the rest of the morning I felt physically weak – even if mentally I was in good form.