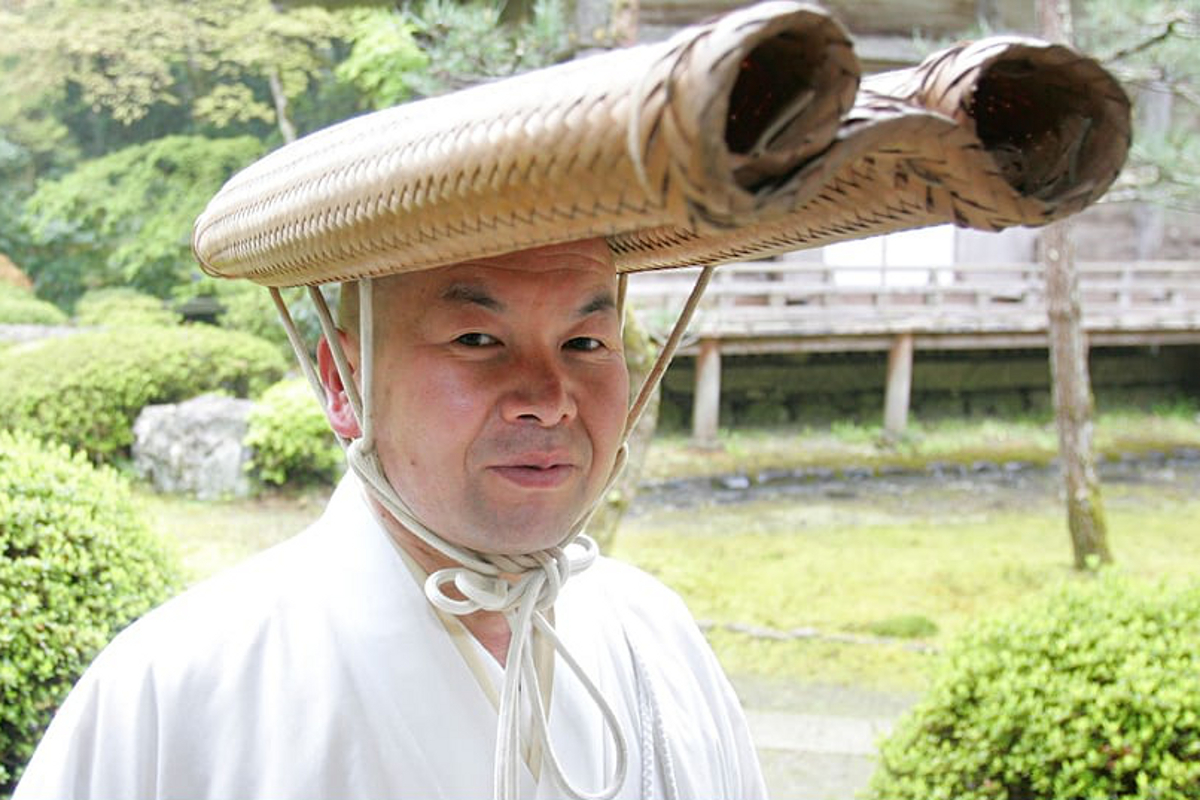 One of the most extreme forms of fasting concerns the so-called Marathon Monks (gyoja) of Mt. Hiei, Japan. This article will describe the practice in full, but first it’s important to know that the fasting itself forms only one part of an almost superhuman seven-year challenge. According to tradition, certain aspiring Zen Buddhist monks volunteer to undertake a spiritual path which involves completing 1000 marathon and double-marathon runs alone on the sacred mountains surrounding the city of Kyoto. As if this weren’t hard enough in itself, they also survive on a minimum of both sleep and calories.

Through the rigours of their training and the thousands of hours spent running in solitude along forest paths, the Marathon Monks hope to find enlightenment. In typical Japanese fashion, failure is not an option. Each monk carries a symbolic rope and dagger with him at all times. If, for any reason, he is unable to complete one of his runs, suicide by either hanging or disembowelment is the only honourable option.

Each year, training takes place in a 100- or 200-day season in which the monk must complete a rugged course varying between 30km and 84km. There are no rest days and no excuses for not finishing. The only consolation physically is that speed isn’t an issue. The goal isn’t to reach to the “finish line” (that is, the monastery from where he started) as soon as possible. Rather, each day is a pilgrimage, and finishing the daily course too soon is actually seen as a sign that the monk hasn’t spent enough time contemplating his prayers while running and during the brief stops at various shrines along the way.

The dry fast itself:

As if the relentless running weren’t superhuman in itself, the greatest challenge of the dyoja embodies an entirely different practice. This takes place at the end of the fifth year of training, when the monk replaces movement with stillness, extreme yang with extreme yin, and he undertakes doiri: a nine-day dry fast, the intent of which is to bring the monk close enough to the threshold of death that he gains insight on life.

This is more than just ‘any’ nine-day dry fast. Stillness here embraces every sense of the word. Of course, this includes no food or water, which be expected of any dry fast. But true stillness here also means no movement and – in order for it take place fully consciously – no sleep for the duration of the fast. Instead, the monk sits motionlessly in continuous prayer with two assistants present at all times, in order to prevent him from nodding off. The only break to this continuum is a brief daily walk to a nearby well in order to fetch water – not for himself, but instead to provide an offering to Fudo Myo-o, the ninth-century Buddhist priest who founded the monastery on Mt. Hiei.

In his book The Marathon Monks of Mount Hiei, John Stevens describes the process leading up to and including the dry fast:

In order to prepare for doiri, the gyoja (marathon monk) tapers down his intake of food and water to prepare for the fast, usually limiting himself to one simple meal of noodles, potatoes and soup during this time… The first day is no problem, but there is some nausea the second and third day. By the fourth day the pangs of hunger usually cease. By day five, however, the gyoja is so dehydrated that the saliva in his mouth is dried up and he begins to taste blood… Defecation usually disappears from the third or fourth day, but very weak urination generally continues right to the end.

The 2.00 am water-taking ritual helps revive the gyoja. As he steps out of the hall made stuffy by incense smoke and poor circulation, the pure, bracing mountain air helps clear his head. Gyoja claim further that they absorb moisture from the rain and dew through their skin during this walk outdoors. The round trip to the well takes fifteen minutes the first day, but near the end it requires an hour, as the gyoja seems to move in a state of suspended animation.

The doiri – the actual period without food, water, rest or sleep is seven and a half days (182 hours) – is designed to bring the gyoja face to face with death. Hiei legend has it that the original period of doiri was ten days; when almost all of the monks died it was shortened just a bit. It was further discovered that the humid months of summer were too dangerous – the deaths of the two doiri monks mentioned in the modern chronicles both occurred in August…

As doiri nears conclusion, the gyoja experience a feeling of transparency. Nothing is retained; everything – good, bad, neutral – has come out of them, and existence is revealed in crystal clarity…

After finishing doiri and regaining his strength again, the monk resumes training a few weeks later, transformed, reinvigorated. From this point on, every step of his daily marathon becomes an expression of life.

Too much of a good thing is wonderful!

In addition to doiri, the marathon monk can choose to undertake another fast following completion of his seven years of training: the 100,000 Prayer Fast and Fire Ceremony, an eight-day dry fast in which the monk sits continuously in front of a sacred fire, casting prayer sticks into the flames. Again, in the words of John Stevens:

One hundred days before the ceremony, the gyoja embarks on a stringent fast [diet]. All grains – rice, wheat, soy beans and the like – plus salt and most leafy vegetables are prohibited. Consequently, the monk is obliged to live on potatoes and other root vegetables, boiled pine needles, nuts and water. The fast [diet] dries the gyoja out, almost mummifying him, so that he will not expire of excessive perspiration during the eight-day fire ceremony in which he will sit in front of a roaring fire, casting in prayer stick after prayer stick. Although this fast is one day shorter than that of doiri and a few hours of sitting-up sleep is [sic.] permitted, most gyoja feel that this is the greater trial – it is in the early stages “like being roasted alive in hell.” Here again, the gyoja eventually becomes one with the fiery presence of Fudo Myo-o, consuming all evil and purifying the world…

Considering the rigours of their spiritual path, it’s no wonder that over the centuries the marathon monks have been considered as ‘living buddhas’.  In days of old, they also enjoyed the unique privilege of being allowed to appear before the emperor without wearing shoes: a crime for which anyone else would have met certain death! More important than the external recognition, though, is the internal transformation – both physical and spiritual – which inevitably takes place. Having completed their seven-year challenge, having experienced the purification of both the running and the fasting, many of the monks continue on their own initiative, training and fasting well into old age.

Through their example, the marathon monks offer inspiration to the rest of us. Even if we manage only a mile or two each day, even if we fast just a little bit, it can only do us good!

I’ve been water fasting as part of a healthy lifestyle and path of self-discovery for many years now – and I’ve helped countless others do the same. I hope the various programs and online support, as well as the articles and videos offered on this website, deepen your own journey into water fasting.